Sir David Salomons' rare watches collection includes items from the 18th and 19th centuries, amongst which are 200 magnificent and sophisticated watches: Simple watches and music-playing watches that are masterpieces of mechanical and aesthetic work, clocks with automatic winding mechanism (which were novelty at the time), pendulum clocks and grandfather clocks, scientific measuring instruments, and musical boxes and enamel boxes with a tiny mechanisms.

Peek into several items from the collection using 3D technology!
(Click on the image) 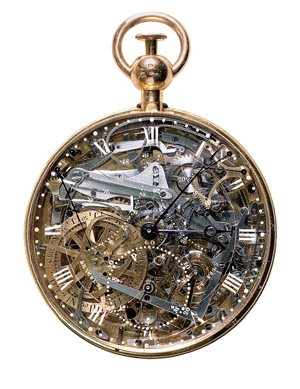 Case: Gold with rock crystal covers back and front.

Dial: Rock crystal with Roman numerals Signed Breguet et Fils. Subsidiary dial for seconds containing day of the week, blued steel hands with jumping hour hand, sectors at the left for equation of time and state of winding, sectors at the right for date of the month and thermometer scale. Signed Breguet No. 160 on the side.

An alternative dial of white enamel with Arabic numerals and sectors similar to the rock crystal dial was also made but not used in the watch.

This watch is said to have been ordered by an officer of the guard of Queen Marie Antoinette. It was to include every known complication and, except for the components normally made of steel, only gold was to be used in its construction. It was completed in 1820, almost 30 years after the Queen was executed. Breguet subsequently described it as a monument to 18th-century horological skills. 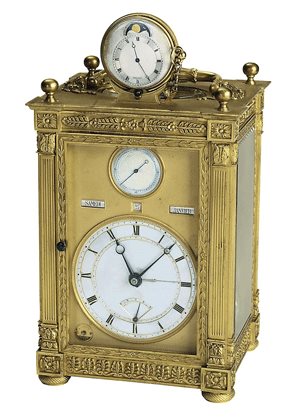 Case: Gilt metal in the Empire style with fluted columns and stylised foliate decorations, glazed on all sides, glass panel and repeating button at the top. 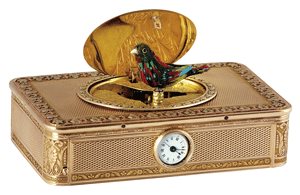 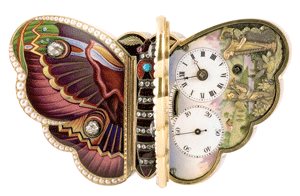 Case: Gold, in the form of a butterfly with polychrome enamel set with diamonds, rubies and turquoise, and bordered with split pearls.

Dial: White enamel, separate dials for hours with Roman numerals and seconds with Arabic numerals, blued steel hands; the dial panel with automata consisting of a lady playing the harp and a cherub playing the lyre in unison. The music is sounded at will by steel tines plucked by steel pins set on both sides of a revolving disc. 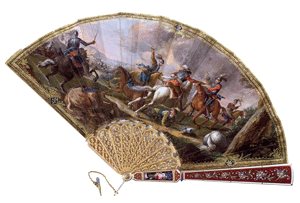 Fan: Gold, with pearl-set translucent red enamel panels over the handles, chicken skin leaf with a battle scene painted on the front and a floral pattern on the back spreading over openwork gold sticks. One handle opens to reveal a watch; the other contains a box with a lever to release the music produced by a pinned-barrel mechanism covered by a blue enamel panel painted with a floral and fruit design. 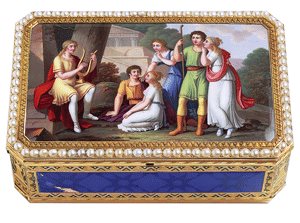 The side panels arecovered with translucent enamel overengine-turning. In the front panel aresix small enamel plaques with different
figures and a drawer into which theplaques are placed one at a time.

Whenthe drawer is pushed in, it releases themusic, the magician shakes his head,strikes the tree and the plaque chosenreappears in an opening of the rock.
Signed Puyroche J. & F. 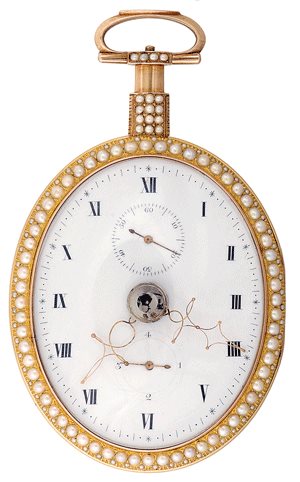 Case: Gold, oval, with split-pearl decoration on the bezels and pendant, back with translucent blue enamel over engine-turning, with applied formal decoration of diamonds and split pearls within a border of red and white enamel against a blue and white ground.

Dial: White enamel with Roman numerals, subsidiary dial for seconds above and for quarter-seconds below. Movement: Originally cylinder escapement, converted to lever in 1902, compensation balance, spiral spring with terminal curve and regulator. The hands of this watch are articulated to follow an oval cam at the centre of the dial and thus in rotating they lengthen and shorten according to the axis of the dial.

Enamelled timepiece for the Turkish market 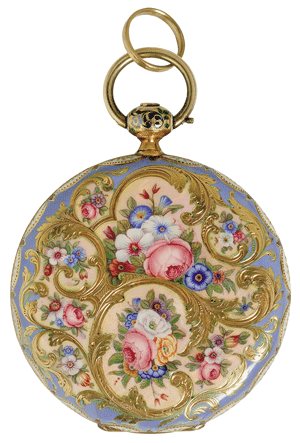 Case: Gold, savonette with enamelled shell decoration framing a portrait of Sultan Abdul Majid on the front and stylised bouquets of flowers on the back.

Dial: White enamel with numbers in Arabic script, subsidiary dial for seconds and centred with symbols of the sciences.

Flagon: Gold and enamel, with handles and watch bezel bordered with split pearls, on the back a painted enamel panel with a woman and a child in an oval pearl-set frame, which opens to release the singing bird. Upper part of the flagon is a perfume container.